Looking at the natural craftsmanship of the furniture in his gallery, it is surprising that Jason Porter started out as a 24-year old business graduate with no real career direction. Even after taking up personal training and odd labour jobs here and there, Porter says he was still wandering aimlessly, never really feeling connected to anything. He found himself comparing himself to his three brothers, who were mechanical engineers, and it made things worse.

Porter became an unintended bespoke carpenter when he finally returned to his roots, working at a cotton farm close to his parents. It was steady work with which he was already comfortable, having grown up on a cotton farm. It was then that his life turned around. The farm operators gave Porter an unfurnished cottage and an old workshop, and it was not long before he began making furniture for his house in his spare time. While he was surprised at how much he loved working with timber, it was how fast the orders started coming in that really struck him. Porter says it was pretty much how the seed of Porter & Wood was planted, growing into a bespoke furniture and clothing business.

He says the unconventional attitude from which Porter & Wood was born continues to be integral to the brand, including its use of recycled timber pulled down from abandoned barns. Porter & Wood is a sustainable brand, with nothing wasted, including scraps being repurposed as chopping boards or bow ties. “The quality products that I make I also consider to be an element of sustainability. My tables are going to be heirlooms, they’ll be ‘your last table’ and can be handed down to the next generation,” Porter said. “I have solar panels that feed my workshop as well.”

Porter & Wood’s rustic aesthetic and locally sourced materials are often a huge selling point with clients, says Porter. He cites a bespoke wall installation for a local bar. “The bar owners wanted to bring something that tells a bit of a story of our region. And using some of the reclaimed barn wood as a feature wall was a perfect way to do this,” he said. “I’ve since learnt the design term ‘juxtaposition’, and I think we’ve definitely used this element in design to create an impactful space, by having old rough sawn barn wood next to new state of the art fridges, TVs, and crisp finishes.”

Reflecting on his journey, Porter says he has proudly gone against the grain. “I’m reclaiming timbers from barns people have forgotten about, off my own back, unpaid. I’m doing a much less common trade, on a place that typically only farmers live,” he said.  Porter concludes that the “un-business minded” decisions he embraces for his brand, for his own enjoyment, ironically may be what works best for the business. 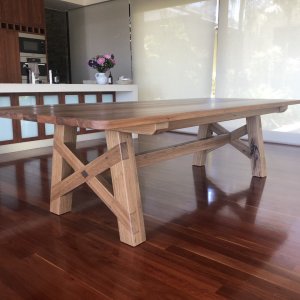 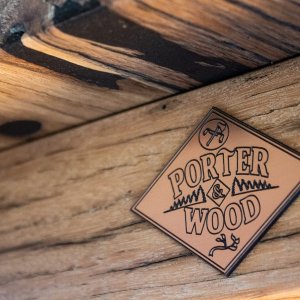