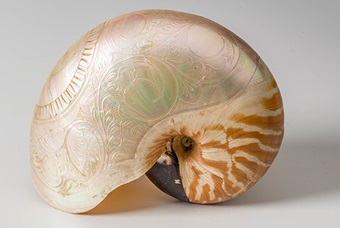 Nacre (pronounced ‘NAY-ker’ or ‘NAK-ra’), also referred to as ‘mother-of-pearl’, is the iridescent lining found on the inner shell of many molluscs including pearl oysters, several marine snails and some cephalopods such as the nautilus species. As a commodity, nacre has been collected, used, traded and sold across land and sea for millennia. The Iridescent exhibition showcases specimens and objects held in the museum’s collections that illustrate the diverse and imaginative ways that humans have shaped and used this iridescent substance.