A magnificent floral installation is being created by Interflora World Cup Champion Bart Hassam in Queens park during Toowoomba’s Carnival of Flowers.
But once the spectacle is unveiled within the Heritage Bank’s Wine and Food precinct on Friday September 20, it will be a “must see” attraction for those attending the carnival. “I don’t like sharing too much information about the planning and preparation of the work I do,” Hassam says. “I feel that can take away from the surprise element of the showing. I can say, though, that I will be working in Toowoomba on the design and structure for three days. An important aim will be ensuring the display is safe, because it will be in an outdoor area, but I also want to make it interactive with people, so they will be able to take selfies. The finished product will have lots of brightly coloured flowers, coming mainly from Queensland growers, and designed in a way that will be able to withstand the elements.”

This will be the 19th year in which Hassam has played a part in the Carnival of Flowers. Over the intervening time he has earned an international reputation as a celebrated floral designer. His status around the globe rose steadily as he won five Australian Florist of the Year titles between 2002 and 2015 and an Asian Cup in 2011, on his way to capturing the World Cup — against rivals from 25 countries — in Philadelphia in March. “I’ve liked to enter competitions every two or three years but now that I’ve won the World Cup, I don’t know whether I will compete again,” says Bart, who is proprietor of two Maison Fleur stores in Brisbane city. “Even though I love being a commercial florist, the design side of things is what I love even more,” he says.

It was during his years as a school boy in Bundaberg that Hassam’s interest was nurtured by his grandmother Ruby Hassam and Brisbane florist Val Sier. “I had a great education from my grandmother in the way plants grow, types of growing areas, flowering times, common names and botanical names,” he says. “While I was at high school I met Val Sier through a family friend and I’d go to Brisbane to work in her shop in school holidays and that sort of thing. When I began studying for a Certificate of Commercial Floristry I already knew a lot of what I was being taught.” On receiving his certificate — he had worked in a florist while studying — Hassam’s “boss” advised him to gain experience in Japan because the “flowers are of amazing quality and the competition fantastic”. He worked “on-and-off” in Japan over the next 10 years as “head of competition”, focusing on structures and designs for leading industry identity Yoko Takahashi. “I also had stopovers in Germany, France or wherever during the visits to Japan and it was a great learning curve for me,” says Hassam, who now travels around the world teaching designers about new ways of working with flowers and foliage. 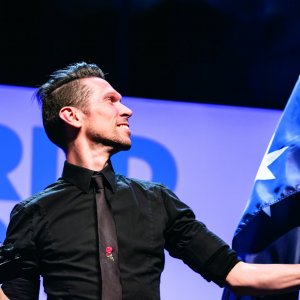 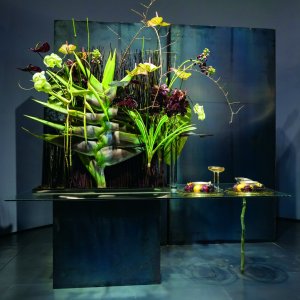 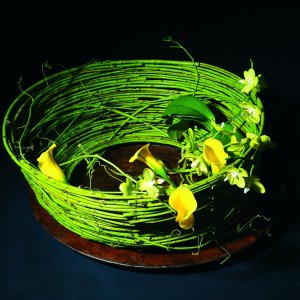