The Fairholme Seniors leadership group has produced its own magazine called Flourish, an idea that originated mid COVID, when they were not able to go ahead with many of the other ideas they had planned for this year.

“We wanted to make something fun, interesting and different for the Fairholme community as a way to raise spirits and get girls involved, so we thought a magazine would be the perfect option. We are encouraging girls to send in ideas and articles so that we can use flourish as a way for students to make their voices heard and share everyone’s stories,” said Head Girl Laura Craft.

“After we got the idea going, we worked really hard to get the first edition out as a surprise before the end of Term 2, and overall, it was really well received. We are hoping to pass it on to the head girls of 2021 so that the idea can continue to flourish in the Fairholme community,” she said.

Head Day Girl and fellow Flourish creator Phoebe Meyer-Elks said, “Mid-COVID wave one, attending a webinar aimed at school leaders of girl’s schools, and hearing a range of hosts speak on how they were able to be leaders through adversity, I remember one thing really sticking with me. Someone asked us if when we are a year into the future if we will be able to look back on what we did with pride. At the time I was kind of just letting the year pass me by, so this really made me stop and realise the error in my ways.”

Head Boarder Zara Bambling, also on the magazine founding team said, “Shortly after that, late on a Wednesday afternoon, the three of us had a meeting on the floors of the senior school corridors, brainstorming things that could be something fun and different and that would hopefully positively impact the girls and include them as well.

“I’m not entirely sure who thought of it, we may have all kind of thought the same thing at the same moment, but during this meeting, we were chatting with one of our teachers about our ideas and hers and we spotted the Frankie magazine she was carrying. We thought, `Oh my goodness we could do a magazine?’ We remembered how much girls enjoy reading those kinds of inspiring mags with stories for all areas of life and I think that was when we decided that was our plan. That whole week leading up to the release of the first edition of Flourish, we were ecstatic I suppose you could say, bouncing off the walls whenever we had a planning session and staying late at school to get it done as soon as possible.” 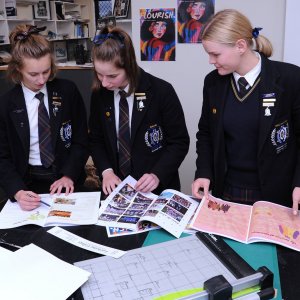 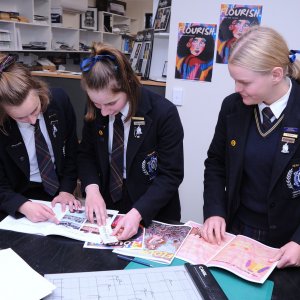 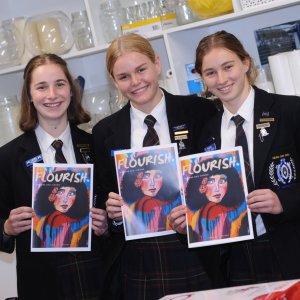