Coming up the rustic gravel drive to Hampton Park conjures the impression of approaching a sprawling estate in the Hamptons, as the property’s name and style suggests. The country estate, created by Bryant Brothers Building Group duo Matthew and Jason Bryant, showcases an award-winning residence; the exquisite result of a collaboration between local building and design firms.

Yet, despite its stately grandeur, Hampton Park is snuggled so comfortably into the hillside that it makes one feel relaxed and grounded in its presence. The timeless effect is far from accidental. The Bryant brothers say it was a key element to the initial design stages and remained a focus throughout the project. Both brothers wanted the five-bedroom home to look as though it might have existed more than 100 years ago. Sturdy red brick cradles the structure and frames the home as it gently climbs the hillside, bringing warm, rich tones to the mostly dove-feather hued exterior. The tall brick chimney is Jason Bryant’s favourite feature. “It is nine metres tall and a focal point of the façade, strategically aligned to be one of the first things you notice coming up the driveway,” he said.

The exterior facade is broken up by the changes in depth from room to room along the front of the house, bringing a striking, non-symmetrical balance to the home’s appearance. Inside, the timeless style continues with VJ walls, and classic cabinetry design, all settled harmoniously alongside modern comforts. White plantation shutters block out the sun on lazy, relaxed mornings, but when opened, invite an abundance of light inside, with no need to consider the neighbours on this secluded property. It is impossible not to be soothed by the natural beauty surrounding the home. The kitchen and living area is Jason’s second favourite space. “We love the beautiful fireplace with stone hearth, custom built mantelpiece, and shaker joinery throughout the kitchen,” he said. The master bedroom suite impresses with its generous floor space and feature corner windows bringing in the natural beauty of the bushland surrounding the home. The VJ walls are used as an enchanting feature behind the main bedhead. The ensuite embodies luxury with a wall-to-wall glass window behind the cast iron claw foot bath, together with custom joinery, stone benches, double shower and Italian feature tiles.

Adjoining the ensuite is the walk-in robe, complete with a marble stone top dressing table and custom fitout robes, and shaker
doors to keep the space streamlined and effortlessly tidy at all times. The overall effect of this home’s design leaves one certain that every detail of the residence was carefully considered. The finishing touches are all of the highest quality. The construction placed emphasis on sourcing local materials and talent with bricks from Austral Bricks laid by Damian Schurman, louvres from Shades Toowoomba, and a custom built-in cabinet completed by Focus on Kitchens — all Toowoomba businesses. It is easy to see why this graceful building has won the Master Builders National Excellence in Building and Construction Awards for brothers Jason and Matthew Bryant. 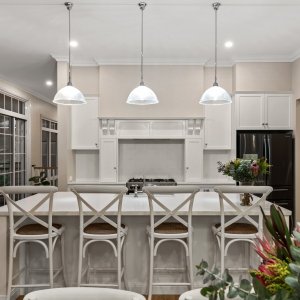 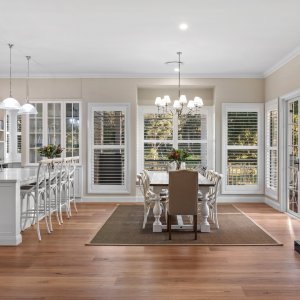 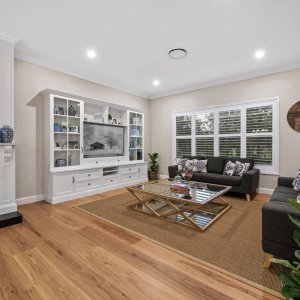 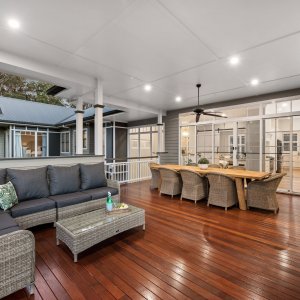 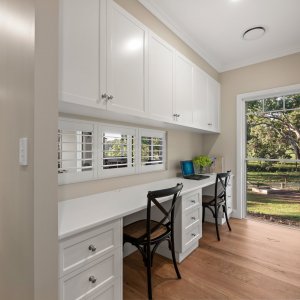 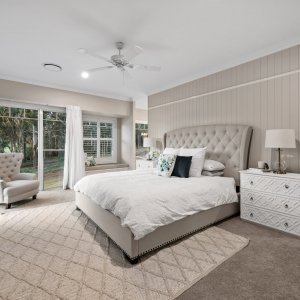 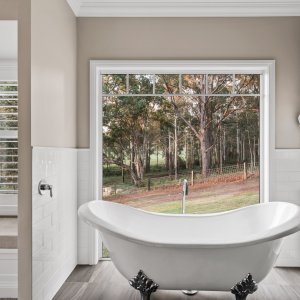 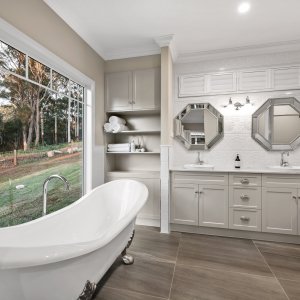 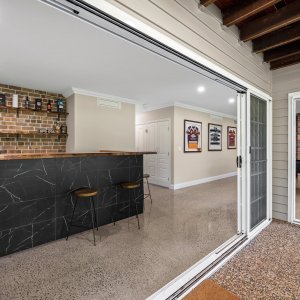