Pottery may just have started our as a fun project with Robert Cullen and his kids when they were little, but it has become a passion that brings him immense amounts of joy.

When my kids were young I was a stay at home dad three days a week,” Cullen said. “I used to take them to the pottery club in Warwick.” Although he enjoyed the craft, life intervened and he ended up taking a break for 10 years. “I’ve really started getting back into it the last three to four years,” he said. “When you start out you think everything looks nice, but it doesn’t.” Cullen threw himself into learning as much as he could, and practising what he learned. Soon his work started to sell. “I was pleased to pay for my next lot of clay,” Cullen said with a laugh. “Then you buy more stuff and more equipment like wheels and kilns.” Soon he outgrew his makeshift studio on the verandah where he froze in winter and boiled in summer, and built a shed with airconditioning.

“It’s good all year round,” he said. Robert Cullen Pottery was now firmly established and before long his beautiful stoneware pottery was in demand throughout the country. “It was just a sleeping passion, I suppose,” Cullen mused. “I remembered how much I liked it. It’s become a bit more than a hobby. I still work full time, but I come home pretty much every afternoon and do something in the studio.” Cullen’s work is now sold in cafes and coffee shops in Adelaide, Brisbane, Noosa and Longreach, and he supplies bulk orders of his signature cups and coffee mugs to numerous cafes. He also sells direct through his Etsy shop and has exhibits of his work through Gallery 22. Cullen makes stoneware pottery because he likes creating useful things that stand up to the rigours of everyday use, but recently he began working with porcelain as well. “I always wanted to go to a residency,” he said. “It’s something a lot of potters do.”

He applied for an Artist Residency in Japan and, much to his delight, was selected. “It was one of the best months of my life,” Cullen said. “It was great.” He studied under a 90-year old Japanese potter who taught him how to throw porcelain, the intricate art of traditional cobalt painting, and unique celadon glazing. “It really helped my throwing skills,” Cullen said. “You’ve got to be really spot on with your technique to get a good shape out of porcelain. It gives you another medium to apply to your craft.” While mugs and cups are his bread and butter, he loves throwing big pieces of stoneware and porcelain. “That really gives you a nice canvas to show off your glazes,” he said. Cullen’s passion for pottery has only increased since his trip to Japan. “I love the feel of the clay on my wheel,” Cullen said. “You can transform a blob of mud into something beautiful.” 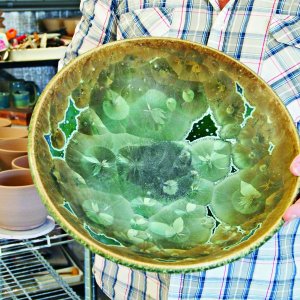 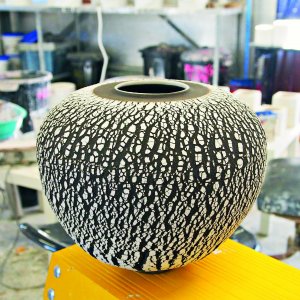 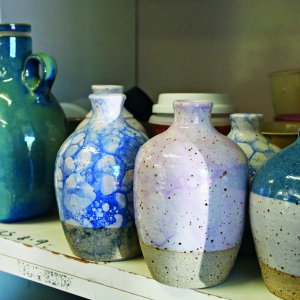 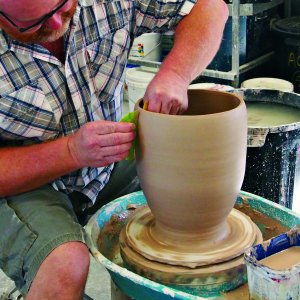 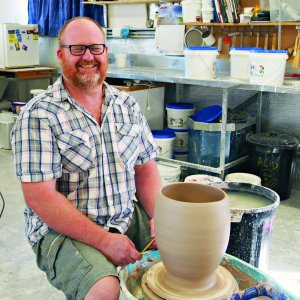 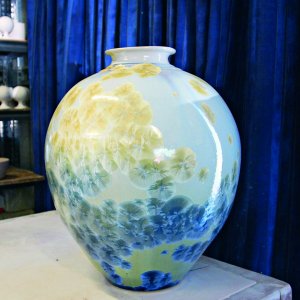