Toowoomba’s Queens Park has officially reopened after it’s $1.3 million upgrade. Thanks to $1.3 million from the State Government, taking the family to Queens Park is now even more enjoyable and safer with its lighting, pathways, landscaping and playground upgrades including an improved all-abilities play-space.

At the official opening, the Minister for Local Government Stirling Hinchliffe congratulated Mayor Paul Antonio and the entire Toowoomba Regional Council on their commitment to implementing the Queens Park Master Plan. “I am proud the Queensland Government could play its part in supporting Council’s Queens Park Master Plan Implementation Project with almost $1.3 million from the Local Government Grants and Subsidies Program,” Mr Hinchliffe said.

“These new facilities confirm Queens Park as the go to place to meet in the city. Not only are these beautiful gardens more accessible through improved pathways and lighting, but the park area is further enhanced by the playgrounds and landscaping along the Margaret Street frontage. Toowoomba Regional Council’s $12 million Queens Park Master Plan Implementation Project will enhance public facilities while ensuring the unique heritage values of the park are maintained.”

Toowoomba Region Mayor Paul Antonio thanked the Government for its support. “Looking around at the playgrounds, off-leash area, paths and improved lighting, shows what we can achieve when we work together to create better amenities for the people of Toowoomba and visitors to the city,” Mayor Antonio said. “I am very proud of my Council team members who have worked hard on Queens Park stage five and I am looking forward to seeing the final two stages of the Master Plan come to realisation. Council has invested $1.93 million in this Stage 5 project, which will ensure we provide first-rate facilities for everyone to enjoy.” 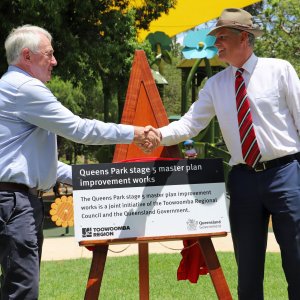 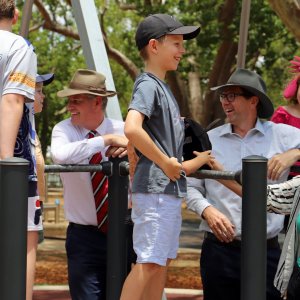 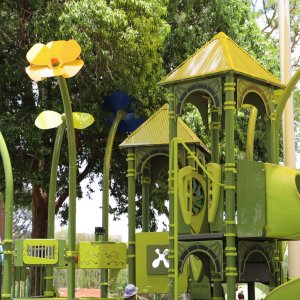