It is a delightful experience to stroll through the Queensland heritage listed Queens park and botanical gardens in the garden city of Toowoomba.

The experience is especially lovely during the Carnival of Flowers held in September of each year. At that time a bright, beautiful array of flowers are on display amid large canopies of stately trees set in hectares of expansive lawns. As Toowoomba Regional Councillor Geoff McDonald says, the park and gardens attract “many thousands” of visitors each year. “The transformation of Queens Park Botanic Gardens into a patchwork of vibrant colours and lovely aromas through the spring and summer provides so much pleasure for locals and visitors alike,” Cr McDonald says. “There is joy in watching multiple generations of families coming together with friends to appreciate the free music in the park over the 10 days of the carnival.

Their sharing in a picnic or simply immersing themselves in such an exceptionally positive setting always puts a smile on my face.” In 1869, Toowoomba’s first mayor William Henry Groom became largely responsible for land being gazetted as a public reserve. Over the next four years the area bounded by Margaret, Lindsay, Hume, Godsall and Campbell Streets was used for the grazing of cattle and horses as well as being a source of clay. In 1873, Council made a grant of 200 pounds for the development of Queens Park and the following year Groom lobbied the colonial government for 500 pounds to develop a botanic gardens in conjunction with a public recreation park. With the establishment of the Toowoomba Botanic Gardens, curator Edward Way was appointed and the gardens were established by late 1875.

By then Queens Park and the Botanic Gardens had walks, borders, flower beds, nurseries of exotic trees, specimen grass plantings and a bush house. Through the 1920s, Queens Park and adjacent Botanic Gardens were regarded as the premier examples of the city’s network of established gardens and Toowoomba became renowned as the garden city of Queensland. During the 1940s, a children’s playground was constructed in Queens Park.

In 1950 the first Carnival of Flowers was conducted and this has since flourished to a point where it is now one of Queensland’s iconic events.  Development continued through
the fifties, sixties and seventies when a dramatic overhaul of the existing facilities was undertaken, and the municipal baths, built in 1894, were removed. Over the years since, substantial remnants of early planting have been retained within the park and the gardens.

The most prominent of these is the camphor laurel avenue running northsouth from Margaret to Campbell Streets. Many single trees also remain, among them bottle trees, Bunya pines, Chinese elm, cricket bat willow, English oak, Himalayan pine, jacaranda, Norfolk Island pine, plane trees, kauri pine, silky oak, silver maple and swamp cypress. The focal point of the gardens continues to be the Thomas Memorial constructed in honour of Alfred Thomas, who played a significant part in the construction in the 1870s of the railway line from Brisbane to Toowoomba. 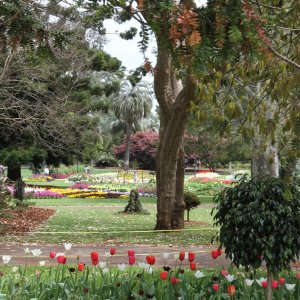 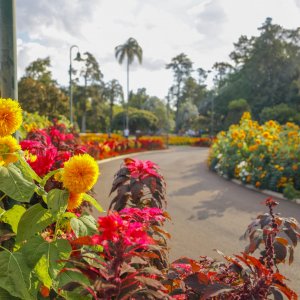 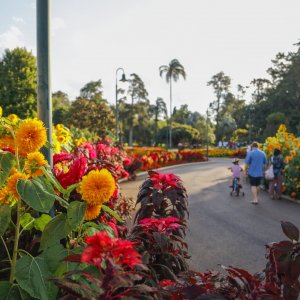