Geoff Adams of KoolKat Quilting has returned from a two week tour of Xi’an’s Silk Road in China. See what he thought of the trip …

Travel may broaden the mind, but it frequently results in sensory overload as it happened to me on my first trip to China, albeit to a less populated part of the country.

Our journey began at Xi’an, the former ancient capital of China. First impressions are of the sheer size of this country, not just numbers of people, but the construction activity. This has resulted in over-construction – we were told that in some towns, around half of the apartment towers were unoccupied. My next impression was of the helpfulness and honesty of the local people. At Xi’an on my first morning after arrival, I decided to set out and discover the city at dawn.  My plan was to walk in one direction, then return. That is not what happened.

As a keen photographer, I found much to attract my interest.  Historic buildings in golden light, a bustling fish market, street cleaners wielding straw brooms, early morning exercise being undertaken in parks, scooters and tuk tuk like vehicles laden with goods and produce – in short all the people whose activity is vital in bringing another day to life in a city of nine million. Then of course my feet began to tell me I needed to give up on finding the hotel, and hail a cab. The driver spoke no English. Note to self – when traveling, always get a card from the hotel with its contact details printed in the local language.

While there are many excellent museums, the rush to sweep aside the old for the new could mean that in the future little trace will remain of how people lived just a short time ago. There is a heritage of buildings that help convey some idea of what life might have been like.  The scale of China is not just a modern phenomenon.  The first emperor is buried near Xi’an.  After numerous wars, this emperor united China for the first time. The Mogao Grottoes outside Dunhuang were the best for Buddhist art and sculpture.

The ancient city of Yar out from Urumqi, is a world heritage site as are other places along the Silk Road.  Although badly eroded, and has suffered at the hands of the Mongols, it does give an appreciation of how villages were laid at the time when the tinkling of the traders’ camel bells could be heard in the desert.

Every meal is an event.  Not content to dine at hotels, we ate at restaurants, and the serving style was a banquet. It is a new world of delectable delights, and there are even the dishes that stare back. Whole chickens chopped and arranged spatchcock style, with the head attached. Or a plate of quails with enough heads to resemble a busy day at the executioner’s block. 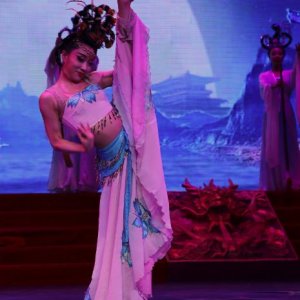 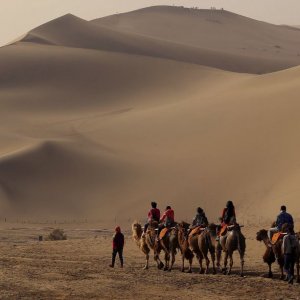 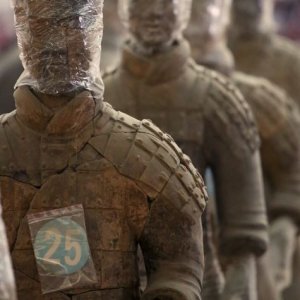 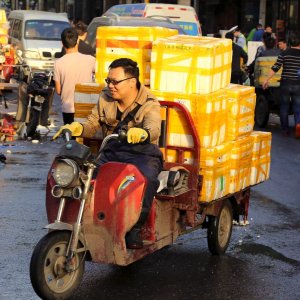 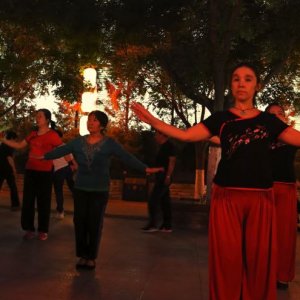 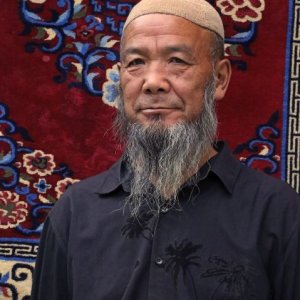 Moslem at mosque in western China