The postcard perfect Thallon silo mural, The Watering Hole, was voted ‘Best of the Best’ at the inaugural Australian Street Art Awards. Driving along the Carnarvon Highway it is a delightful surprise when the towering Thallon GrainCorp Silos spring into view punctuating the flat landscape with glowing hues.

Nestled on the Moonie River 400 kilometres west of Toowoomba, Thallon is now one of the main attractions on the Balonne Shire’s river towns tourist trail. Thallon is the big hearted community that refused to give in when it lost its railway station and has weathered years of drought by turning itself into a quirky tourist destination. The transformation began in 2015 with an ambitious plan to create the first silo mural in Queensland and the first in Australia to be painted on a working grain complex. Leanne Brosnan from the Thallon Progress Association dedicated two years of her life to organising the colossal project that has injected new life and hope into the town. To design the mural, Brisbane artists Travis Vinson aka Drapl and Joel Fergie aka The Zookeeper were embedded into the community which has now become their second home.

In July 2017, it took the artists three weeks to paint GrainCorp’s four 30 metre high silos with their masterpiece, The Watering Hole, inspired by three photographs taken by locals. The next year, Australia Post featured the silos on a stamp which Brosnan says was an incredible boost to community morale. “In 2013 Thallon was in danger of losing its postcode, so to have the town feature on a stamp in 2018 signified the turnaround the silo mural had created.” Now the Thallon Silos have won the overall title of Best of the Best at the recent Australian Street Art Awards which recognise towns using publicly accessible art to attract visitors, boost their economy and engage their community.

Meanwhile at the Francis Hotel — the town’s pub, post office and general store — Brian Guppy is whipping up cappuccinos and directing people to William the giant wombat statue. “Being on the tourist map has enabled Thallon to survive; without the visitors we would have been shot ducks,” he says. More and more public art is providing unexpected pops of colour around the town with Drapl and The Zookeeper regularly returning with their paint cans to support the community. In fact, The Zookeeper will hold his wedding in Thallon. “I wanted my city friends to experience how unique Thallon is.” The Thallon Silos will host its second long-table outback dining experience, Grazing at The Watering Hole, on Saturday 5 September 2020. Organised by the Thallon Progress Association and Drapl’s wife Kelly Timmons from Heart Heart Events, the dinner under the stars will feature local produce, fireworks, live art and live music.

Readers also enjoyed our story on Book: Girl’s Guide to the Outback 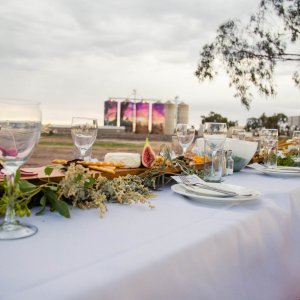 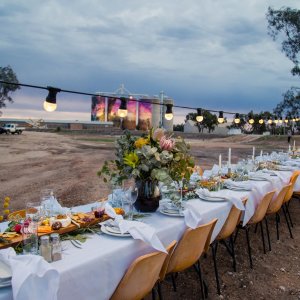 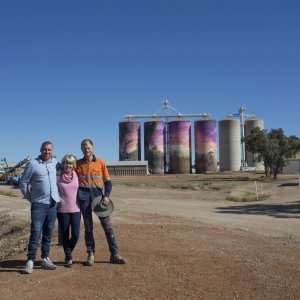 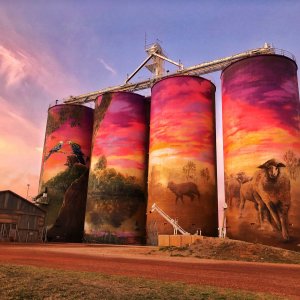 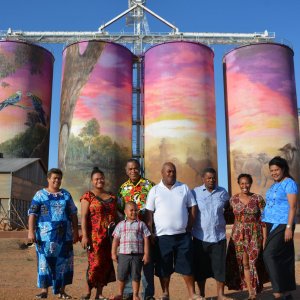