Diadora – which produced the Australia team uniform for the Glasgow Games in 2014 – will again provide the competition wear for Australia’s 470 strong team of athletes across 18 sports, while iconic Australian brand R.M.Williams has created the uniforms to be featured in the opening and closing ceremonies.

The Diadora competition range features the nations brand elements, including a colour gradient from green to gold. Some 58,000 individual items have been produced by Diadora for the Australian team, which will cater for more than 700 athletes and officials.

Commonwealth Games Australia CEO Craig Phillips said he was proud of the uniforms created for the Australian Team.

“With more than 700 athletes and officials set to be part of the Australian Team, this is one of the biggest Australian Team’s assembled for any Games, so outfitting is a real challenge,” he said.

“We really feel that we have a created a uniform that befits the honour of representing Australia on the world stage, but has a casual, contemporary twist that is at home on the Gold Coast. Perhaps most special about the R.M. Williams uniform is the Indigenous artwork detail throughout – featured in the blazer lining, the pocket squares, ties and scarves and also the polo shirt.

“The artwork used throughout the uniform represents ‘Unity’ which is a powerful message for our team,” Phillips said.

The artwork is part of series of works created for the GOLDOC Reconciliation Action Plan by Brisbane based Larrakia woman Jenna Lee.

Overland Group (Diadora) Managing Director Bill Tyson said “We are proud to include items in the range like our polo shirt which is made of recycled plastic along with our rich cool yarn – a great blend of function and sustainability.”

“We have created a ‘head-to-toe’ look that reflects Australia and the Gold Coast – pioneering spirit, rugged elegance, beach and sunshine,” he said. 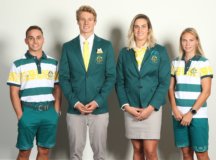 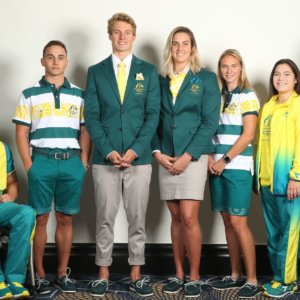 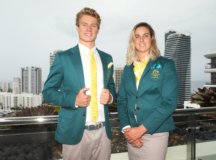