A surfeit of riches is on display at this year’s 33rd annual Downlands Art Exhibition. There are 1,035 paintings on offer as well as 225 artworks, ceramics and millinery.

This year’s offering, which has been presented in a beautifully designed setting, is regarded as being the finest in the show’s history. “We feel this is quite possibly the best we’ve ever had,” said the brilliantly creative Evan Hollis, who has been involved as curator of the exhibition since 2006 and is fresh from designing the sets for My Fair Lady.

A feature of Evan’s inclusion is a series of large oil painting by Thailand’s Maneeerashi Kampipop, who is known for her large scale, thinly layered organic shaped fields of colour. Evan also arranged for a number of impressive unframed indigenous paintings to be made especially for the show. Hailing from the Lockhart River in Far North Queensland, these artists are family members of Downlands students.

Many of the works showing were sourced by Buderim-based Fine Arts Consultant Tiffany Jones and these are highlighted by an extensive collection of Robert Dickerson paintings and drawings.
Also secured for the exhibition by Tiffany are selected works by well known Australian artists Darcy Doyle, Jason Benjamin, Norman Lindsay and Ray Crooke.

There is a strong theme of the Australian landscape with a spectacular feature being “Night” (Straight Line) by Tim Storrier, who won the Archibald Prize in 2012 with his controversial “faceless” self portrait. Featuring among the offering are two “little gems”, priced at $15,000, by Greg Postle, who is a winner of the prestigious Holmes prize. Another “gem” is an early 20th Century pastel nude by Janet Cumbrae Stewart, who is one of the few females to have shown with the major artists in the Paris Salon.

There is also a beautiful little monotype landscape “Walking Under The Gums” by Tom Garrett, who read Holy Orders with the Anglican Church until, about 1929, when he turned to being a professional painter. An added attraction of this monotype is that it was framed in stunning style by the renowned framer R.J. Reynolds. Feature artist Diana Battle, who describes her work as being under an umbrella of expressionistic/impressionistic/abstract, has 22 highly colourful entries, which have an appeal.

The exhibition, which was opened on September 20, will run through until September 28. 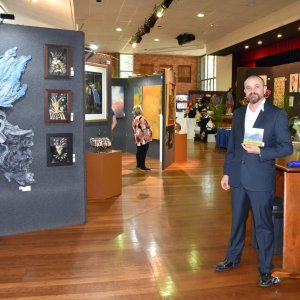 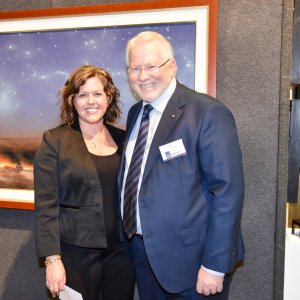 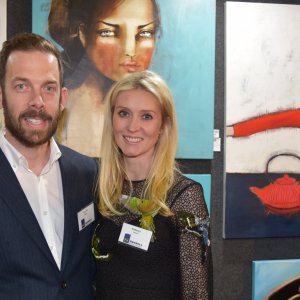