The Empire Theatre’s youngest audience members have the chance to see some of the most popular children’s books in the country come alive on stage as the 2018 season continues.

After launching the children’s program with Yo Diddle Diddle in May, The 78-Storey Treehouse will be on stage for three performances on June 18 and 19. Part of a very popular children’s franchise which includes successful The 13 Storey Treehouse and The 26 Storey Treehouse stage adaptions, The 78 Storey Treehouse is based on the book by Andy Griffiths and Terry Denton and is the brightest blockbuster in the series for those aged six to 12 years.

On July 20 and 21, one of the country’s most popular children’s books, The Very Hungry Caterpillar, will be transformed into a giant pop-up book filled with amazing characters. Characters include an eight foot long red crocodile, a life-size yellow cow, an underwater world filled with all types of sea creatures, three metre beautiful butterfly and of course the hero of the show, The Very Hungry Caterpillar.

August 27 and 28 will see a tale of a bush animal you will never forget in Josephine Wants to Dance. Following the story of Josephine, a kangaroo who has discovered that she loves to dance and has practised for hours and hours, this show is a delightfully funny tale that looks at the importance of believing in yourself and realising your dreams.

After sell-out seasons around the world, classic children’s story, The Gruffalo, comes to Empire Theatre on Saturday 29 September for two performances. Featuring woodland creatures including Mouse, the cunning Fox, the eccentric Owl, and the party mad Snake, this show is full of songs, laughs and fun for children aged three and over.

Readers may also be interested in Empire Theatre Dance. 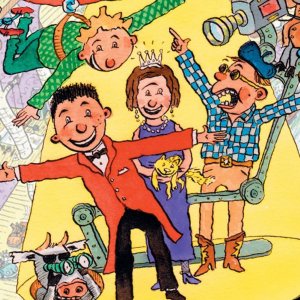 ← Facets of Fairholme
Back to the Bush →