Published on February 1, 2018 | in Business/Industry
Prime Minister Malcolm Turnbull swapped the boardroom for the Garden City to deliver his first national address of the year at Toowoomba’s Empire Theatre.

The Prime Minister used his first major speech to reiterate his prior commitment to business and personal tax cuts, using Toowoomba as a prime example of how regional Australia will bolster the future of the nation.

“I was pleased to give the Prime Minister a tour of the largest and most beautiful theatre in regional Australia while he was here,” said Mr Saul.

After the address, the Prime Minister presented Mayor Paul Antonio with a new Australian flag, after noticing on his morning walk that the previous Toowoomba City Hall flag was starting to show signs of wear, before sitting down to discuss a range of local issues.

Mr Turnbull then had a tour of the neighbourhood, stopping into local businesses to visit the community.

Owner of local cafe The Finch Dan Farqhuar said it was a pleasure to serve the Prime Minister.

“He ordered a double espresso before his radio interview, then popped back in for a smashed avocado,” said Dan.

“He’s such a friendly and personable bloke, and it was fantastic to have him in town.” 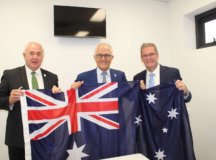 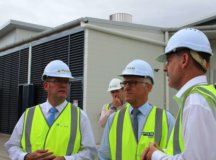 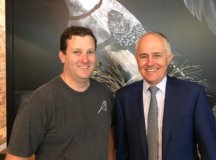