A full-time artist for the last 10 years, Jenie Fawckner says her career has evolved from a “really creative childhood”. Fawckner grew up on her family’s property at Blackhall, a small town in central west Queensland nearly 1000 kilometres from Brisbane.

“My mother was extremely creative and all her sisters were very creative,” she says. “I was taught to do a lot of things very early on. I had access to a potting wheel, spinning wheels and paints, knitting, sewing, drawing and all those sorts of things. That ignited my interest as a young child and that was where my main interest was at school.”

After finishing her primary schooling in Blackhall, Fawckner was enrolled as a boarder at Brisbane Girls Grammar School, which led to her enrolling for a three-year Degree at Queensland College of Fine Arts. “The course in those years was very practical and I majored in screen printing and minored in painting,” she says. On completing her course, Fawckner spent the next several years continuing to develop her artistic skills, part time, working and travelling around Australia and overseas. “I was screen printing and doing landscapes during that time,” she says. “I had a few little solo exhibitions but I mainly sold my work in little shows and by word of mouth.”

Then, at 26, she married Gordon, and for the next 20 years, they lived on a cattle property at Kintilloch, 80 kilometres south of Roma, where they had four children Josie, Nina, Sophie and Ted in the space of five years. “I had a studio and kept working very, very part time when the kids were little,” she says. However, by 2010 Fawckner had put together a sufficient amount of work to have a solo exhibition in the newly opened Roma on Bungil Regional Gallery. “My works sold well and that kicked into my going full time,” she says. “I had a solo exhibition in a gallery in Brisbane named Wild Canary and another solo exhibition at the Moree Gallery.” Fawckner describes her work as being a form of modern impressionism.

Jenie had a purpose built studio constructed when the Fawckners moved to Hampton in 2016 and two years later solo exhibitions — at the Moree Gallery and at Art Nuvo Gallery in Buderim —  sold out. “I continually send work to both those galleries as well as having a website,” she says. This year Jenie Fawckner was chosen as the feature artist for the Toowoomba Grammar Art Show, only to have the outbreak of coronavirus force the event to become an online exhibition. “The organising ladies were caught between a rock and a hard place but they did an amazing job getting everything online at the last minute,” Fawckner says. “I am so grateful to them for what they were able to do.” 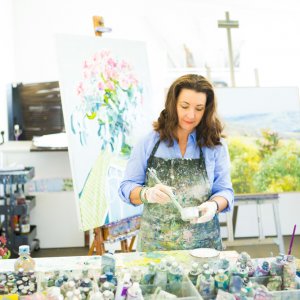 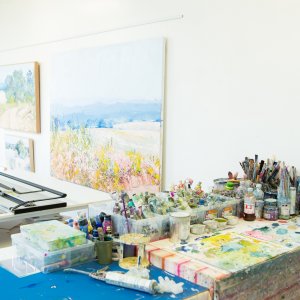 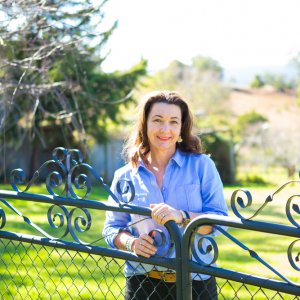