Published on February 8, 2018 | in Community/Events
In the tiny town of Tambo, in the middle of the outback, local women have been crafting sheepskin Tambo Teddies for the past 25 years.

To celebrate this significant milestone a limited-edition bear will be released this month, the Jubilee series, with only 100 of these bears being made. Jubliee Bears will be made in the basil style but will contain the unique feature of a music box singing a special Tambo Teddy tribute.

Tambo Teddies originally began following a government workshop to uncover new industries in regional communities, after which three women got together and decided to form teddy bear company. After nearly a year of extensive planning, designing, trial and error, the first bears were ready for market in 1993. The final design or ‘prototype’ is proudly displayed in store while the first bear to be sold, auspiciously named ‘MacFarlane Mary’ and numbered one on her bum tag, was purchased by the local police Sargent.

Today in 2018, there have been more than 44,000 bears crafted, all created from Australian sheepskin.

The bears come in a range of styles and a multitude of colours, including some very Australian green and gold koalas and echidnas. Top of the range are the outback characters, Mr and Mrs Stockman, who are all decked out in the latest rural fashion of hats, moleskins, check shirts, and bear-as-a-bone coats. Mr Stockman carries his swag and hand-crafted whip all ready for a day’s work.

The original directors Charm Ryrie, Helen Sargood, and Mary Sutherland established the business and worked hard to make its name. After a few years only Mary was left at the helm and eventually she too decided to retire. Wishing to only sell to a local, Mary was delighted when in a unique synergy, three more local ladies decided to take up the challenge.

Kiralee Fox, Tammy Johnson and Alison Shaw purchased this iconic little business in March 2014 and have implemented new ideas and methods including expansion online whilst keeping true to its Australian made origins.

Speaking for the group Tammy commented, “we purchased this business because we believed it has a great core product that customers just adore, we can build upon this and are working to take our bears further across Australia and overseas, and at the same time helping to promote our little part of the outback.”

It has been a very busy period for the new owners both in the business and in their private lives, two weddings, three babies and one graduation, plus a royal bear, a bear for Queensland’s Premier, bear 40,000 and one Tambo Teddy being liberally thrown around the Brisbane airport by a famous footballer.

Tripling production in the first three years, their aims for the future are much greater. Tammy and Alison will be taking the business forward from 2018, continuing to implement new ideas, promoting and expanding Tambo Teddies further using digital means and the online distribution channels. Still going strong after 25, the ladies are excited about what the next five years might bring. 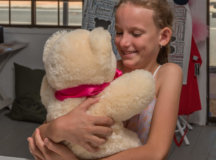 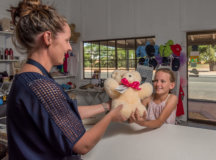 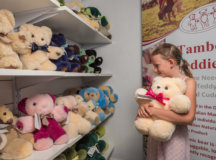